Muir Gray entered the Public Health Service in Oxford in 1972 after qualifying in medicine in Glasgow. He is a consultant in public health in Oxford.
He has been working with both NHS England and Public Health England with the aim of increasing value for both populations and individuals and published How To Get Better Value Healthcare in 2007. The means of doing this through Systems and Personalisation is now called Population Healthcare and the aim of population healthcare is to maximise value and equity by focusing not on institutions, specialties or technologies, but on populations defined by a common symptom such as breathlessness, a condition such as type 1 or Type 2 Diabetes or by a common characteristic, such as multiple morbidity.
Recently he has returned to his first public health mission – preventing the changes we assume are due to ageing and disease by getting the right attitude and fighting back against an environment that makes us inactive. His key books include Sod70! and, with Diana Moran, Sod Sitting, Get Moving!

Sir Muir will speak on

” The Elixir of Life discovered at Oxford”

Billions of dollars have been spent on regenerative medicine and the search for an elixir of life but do people really want to live to be 120? Since 1948 the expectation of life has increased from three score and ten years to four score years. There is still a huge gap in life expectancy between the wealthiest and the poorest sections of society, reflecting underlying social determinants, with the NHS unable to make much impact on this gap. Increasingly however the focus is shifting from life expectancy to healthy life expectancy.

There has been much debate about the impact of population ageing on society and on the NHS. The assumption has been that an increase in very elderly people will mean a proportionate increase in the number of people requiring social care. However, what is now emerging is that we should no longer think of prevention as simply being the prevention of disease but also the prevention of disability, dementia, frailty and dependency. We have to understand what is happening inside us perhaps best shown in the diagram below … 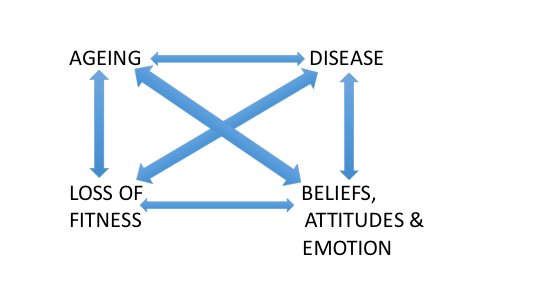 Ageing by itself appears to be relatively unimportant until the late nineties. For many people loss of fitness begins in the early twenties when they get their first sitting job and a fitness gap opens up year after year because of the car, the computer screen and the desk job.

The incidence of disease starts to increase from forty on and some disease is of course is not yet preventable, so you do need a bit of luck. However, what is now emerging is the fact that what we have assumed to be the effects of disease are often the effects of disease and the accelerated loss of fitness that occurs in part because of the direct effect of disease but as much, if not more, due to the social impact of a diagnosis. Too often when a diagnosis is made the individual affected, and their family, assume the best thing is to do less. The concept of care is the wrong concept if it means doing things for people which it does all too often, with loss of fitness rather than disease leading to the person dropping below The Line 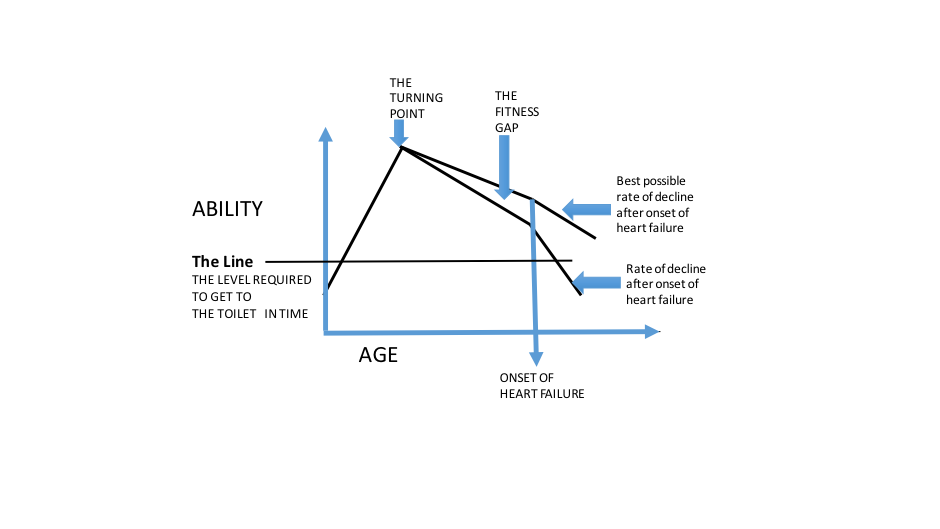 We need therefore to change beliefs and attitudes and part of this is the introduction of a National Activity Therapy Service. In all of this the medical profession has a key role to play and the Academy of Medical Royal Colleges launched this revolution with its report with the wonderful title Exercise the Miracle Cure and the subtitle and what doctors can do to promote it.

A drinks reception in the Marble Hall from 6.00pm will precede the Oration
The banquet will be served at 8.00 pm.

The cost of this, including wine, will be £68 (cheques payable to the Osler Club of London). Alternatively there is a charge of £5 to attend the drinks reception and lecture, booking essential.